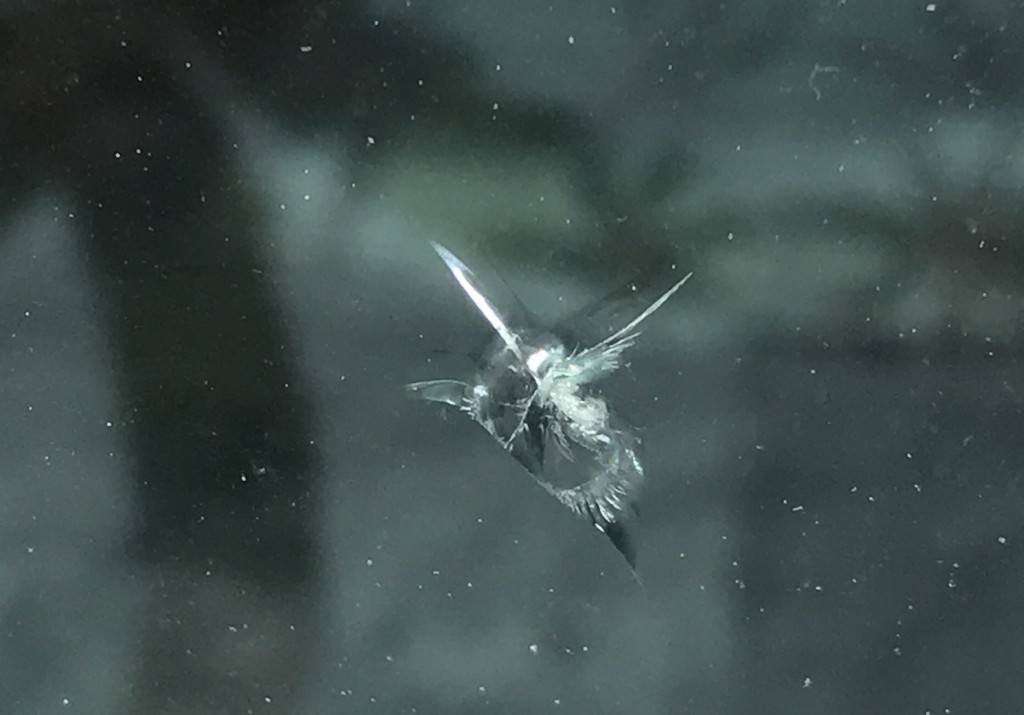 It was bound to happen sooner or later. Unfortunately for us, driving along in our brand new, haven’t-seen-much-of-the-country-yet motor coach, it was sooner. The dreaded but inevitable whack to the windshield. Our first chip.

Chips. Dings. Stars. Cracks. Scratches. When you’re traveling the country’s highways and byways, be it in a motor coach with a windshield that takes up over 40 sq. ft, or  the big windshield of your RV towing truck, it’s not a matter of IF, it’s a matter of WHEN, it’s going to happen. So what do you do?

We did some research and it became clear we needed to act soon. Frigid weather was approaching, and the weather, be it hot or cold, can cause a chip to grow in to something much worse in no time at all. Cold temperatures cause windshields to bend concave, increasing the likelihood of a chip to stretch outward into a horizontal crack. Warm temperatures are no friend either. They increase the likelihood of the chip extending vertically. And of course just traveling to and fro, with all the bumps to endure, regardless of the outdoor temperature, provides enough pressure on a chip to cause it to become a much larger (and more expensive) issue. Also, DO NOT attempt to clean the chip out. Leave it alone. Your repairperson will accomplish all that. And in the mix, after they clean it out, is to inject the area with their resin and then harden it with an ultra-violet light tool.

Our, then forecasted, single digit temps helped make our decision for us. While the repair company will say the bitter cold has no increase in risk on the repair, I believe a windshield repair in such cold conditions could create a less than optimum result. So, we decided to wait a few more days until we headed south to more benign temperatures and have the repair completed there. Yes, we were risking the possibility that the chip would augment along the drive down, but we decided it was the lesser of the two risks. And by the way, the repairperson did tell me that he also believed that a repair in such frigid conditions may actually compromise  a 100 percent effective repair.

I’m not advertising for Safelite, and I’m sure there are other companies who would have done the same, but that said, Safelite made this entire process very convenient for us by coming to our campsite to complete the work, and that’s after I changed the appointment twice before at two other locations during this same trip.  The cost: $110 for the repair + $20 for the on-site repair convenience. Our insurance company, Blue Sky RV Insurance, also made the process as simple as possible. They just needed the scanned receipt emailed to them. Within a week, I received the check, refunding us in full for the repair. No need to meet the deductible on a $2,000 (installed) windshield. No fuss. Glass repair complete!

So our experience was good. No complaints. Have you had a similar experience?