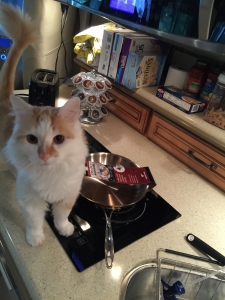 “Curiosity killed the cat.” – A proverb.

See that innocent, sweet-looking feline in the picture above? That’s Emily. Fluffy, demure, troubled, curious Emily. And I am going to blame her for The Stovetop Burning Cardboard Incident of 2015 (the SBCI ’15 for short) that occurred in the wee hours of the morning, while we slept, ignorant of where a quick unbagging of groceries right before bed would lead.

Yes… she’s a cat. I’m a human. So you may think I deserve the blame. And you may be right. I’ll tell the tale and you decide.

I don’t cook much. I neither enjoy it, nor am particularly good at it. So my life on the road these last several months  has been going along just fine (or so I thought!) without proper pots and pans for the RV’s induction stovetop. But one night, with some frustration, Bill made a calm but firm plea for some “real” food. He didn’t go all neanderthal on me. He wasn’t saying, “You are woman. Feed me food.” But he was tired of eating out and microwave meals. (Unlike me, he doesn’t find cereal suitable for breakfast, lunch, and dinner. Weird, eh?) What he was suggesting was that we cook more together. Like “real” food, with recipes and stuff.

The thing is, Bill has very little free time, so I was having trouble picturing him squeezing meal preparation into his current schedule. Instead, I thought: I’m gonna fix my fella lasagna. He likes lasagna, and it’s something I know how to make, and to my recollection, I’ve never screwed it up. – So a near guarantee of cooking success. The problem was, I had no skillet appropriately sized to brown the meat in. A quick stop into Bed, Bath & Beyond remedied that, followed by a trip to Kroger for the ingredients.

It was late by the time I got home. With plans to make lasagna for dinner the next day, I was feeling fairly confident that I had successfully set myself up for the Fiancé of the Year Award. I quickly put the groceries away, and then placed the skillet, which had a cardboard sleeve wrapped around it’s center, on the stove. I put it there without a thought. Just did it. Then I got ready for bed, and fell asleep.

Somewhere around 2 a.m., I had a dream, and in that dream, there was an odd smell. More than odd. – It was noxious. I’m a sound sleeper, but this smell woke me up, and I realized the stench was actually in our coach, not the dream.

I mumbled to Bill that something was burning. He didn’t stir. Walking into the kitchen alone, I saw smoke softly billowing from the stovetop. The cardboard wrapped around the skillet was burning.

Emily, in her cat-typical nocturnal rounds, had hopped onto the counter, pranced down to the stove, and placed her itty-bitty paw on the “On” button.

Bill slept through the whole thing. The coach stunk for days.

After a lot of scrubbing, I got the stovetop and the skillet to look like (nearly) new. The smell finally left, and I just couldn’t help but feel so grateful that I woke up when I did and that it was no worse than it was. (It could have been so much worse.)

So who was really to blame? Was it Emily, since it was she who pressed the stovetop’s “On” button? Or was it me for stupidly placing the skillet there? Or…BETTER YET…was it B-i-L-L for wanting a home-cooked meal in the first place!!!