In the Path of Totality – Was it Worth It?

As you may already know, because, after all, the readership of this blog is just that b-i-g (hahahaha… suuuure), on Sunday night I debated whether to hop into Hers and take the 3-hour drive southwest to Hopkinsville, Kentucky in order to see not just the solar eclipse, but the TOTAL eclipse.

I got all Nike about it, and decided: Just do it.

I was up by 4 on Monday It’s-The-Total-Eclipse Morning to shower, straighten and curl my hair, and put on a significant number of cosmetics. (Clearly, I wanted to look nice for the eclipse). I was on the road by 5, and as I approached I-71, I thought: These are my people — the Morning People of the World. (Sure, mostly truckers, but let’s face it, I’m a trucker at heart.)

With a bit of anxiety, I wondered about the logistics ahead. What will the traffic be like? Will I even be able to get into town? Is it going to be tough parking the van? Are the crowds going to be more than I want to handle? etc. etc. etc. (Mild anxiety: loads of fun!)

But happily, when you’re driving a camper van, you have options. At the very least, I had a bed and powder room in tow. I had cold water in the fridge. Basic toiletries, towels, and a toothbrush. I had food… oh, wait, what? I forgot food? I forgot food??? Yep, sure did. Oh well. I had a credit card and cash, so all’s good!

To my happy amazement, I rolled right into downtown Hopkinsville with no problems. That’s right. After an easy breezy 3.5 hour drive, with no traffic to complain of, I parked Hers one block off of Main Street. Yes, one block. I was beyond pleased with myself and Hopkinsville, feeling I was already rocking the 2K17 Total Eclipse and it wasn’t even 9 a.m. yet.

I bided my time until the eclipse began by strolling this small Western Kentucky town, observing the locals and tourists, saying “yes” to stranger’s requests to take their picture in front of this and that, searching for coffee, and stopping at the Piggly Wiggly for some sustenance. I carried my Kindle and Filofax with me, because I’m weird that way.

Here are some pics of Hopkinsville on the big day… 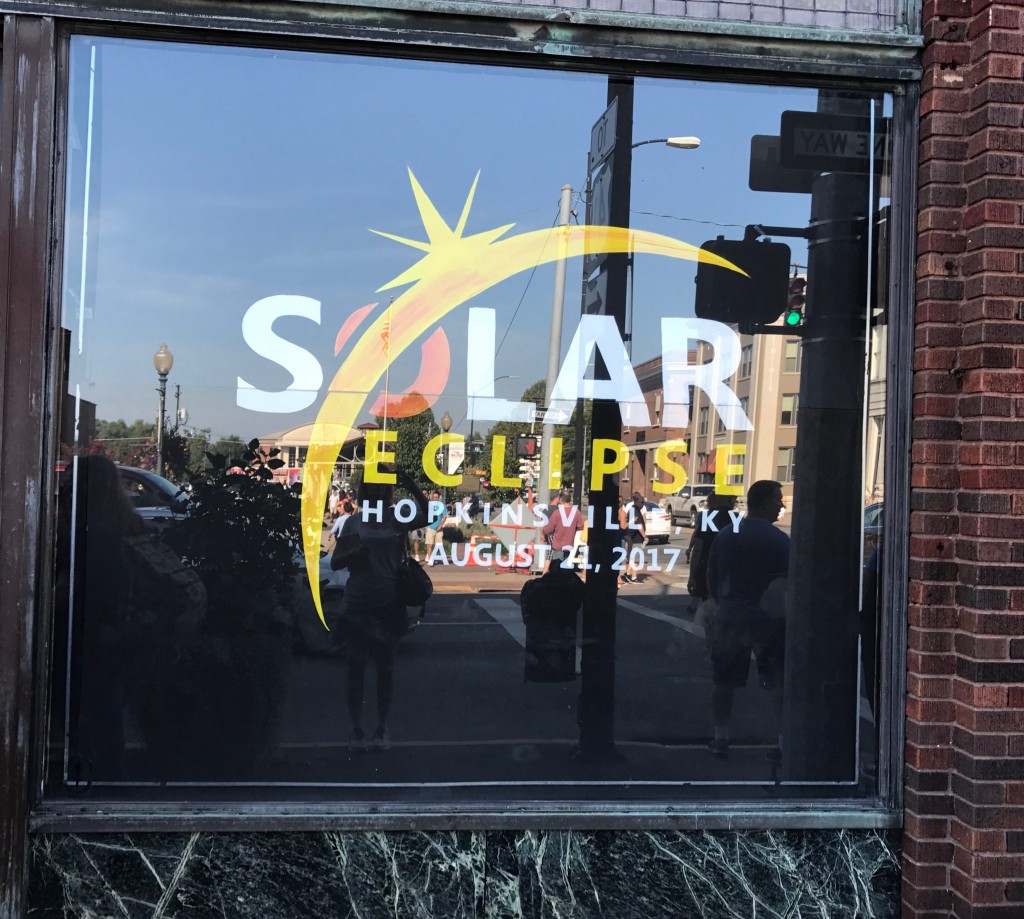 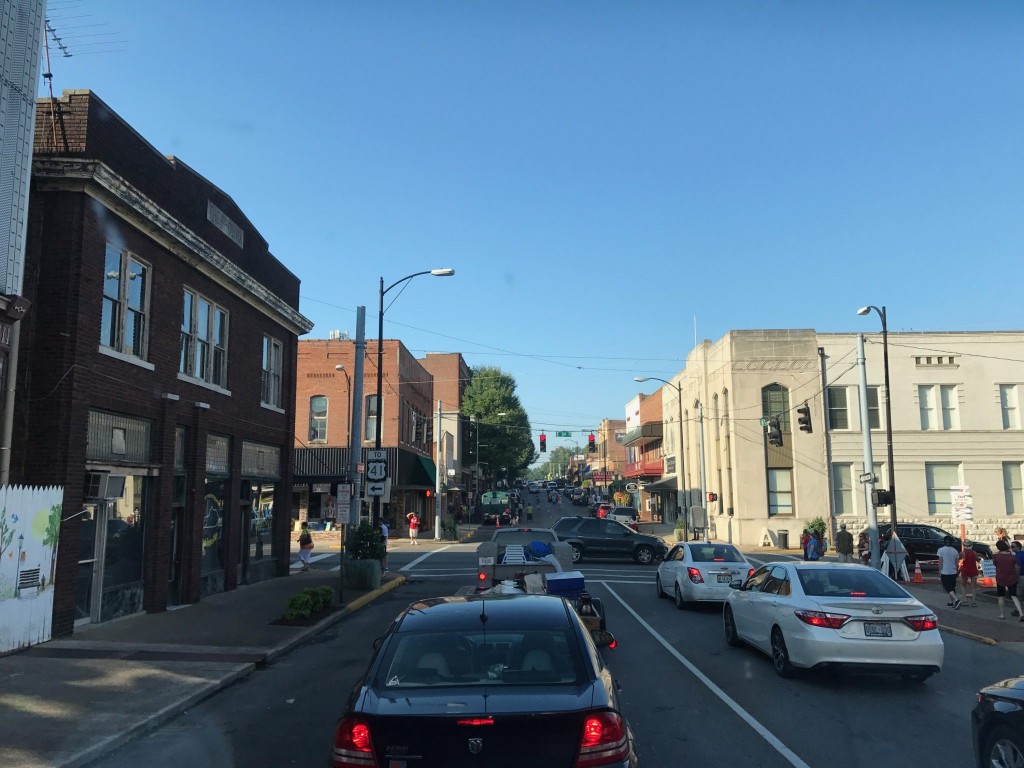 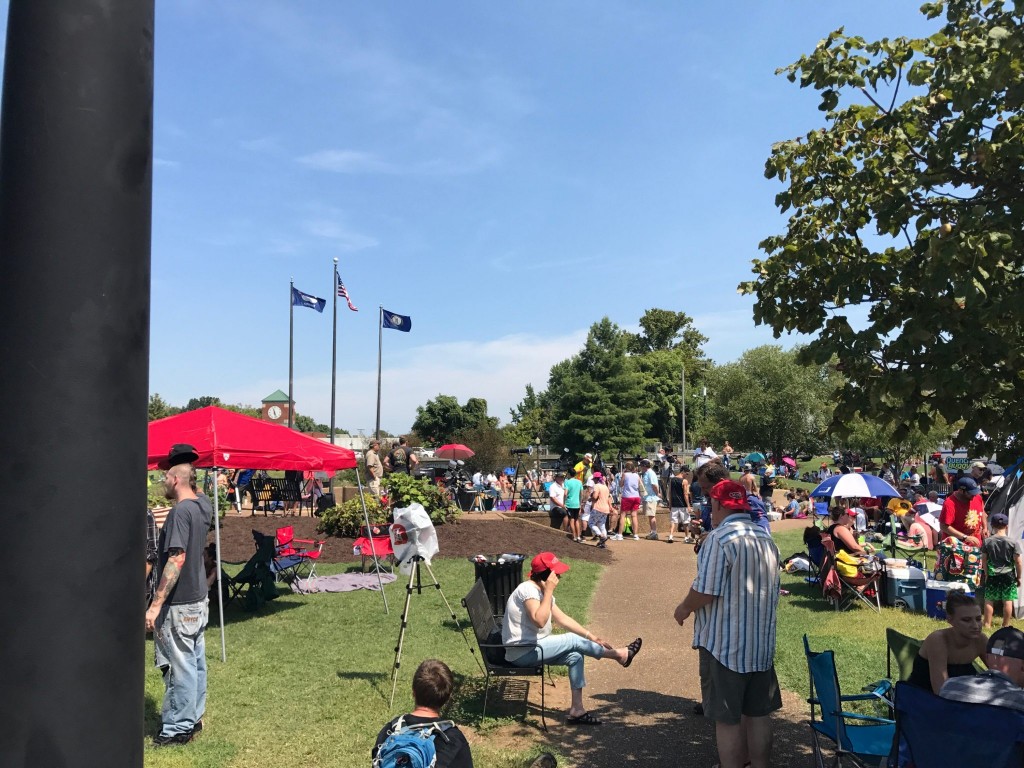 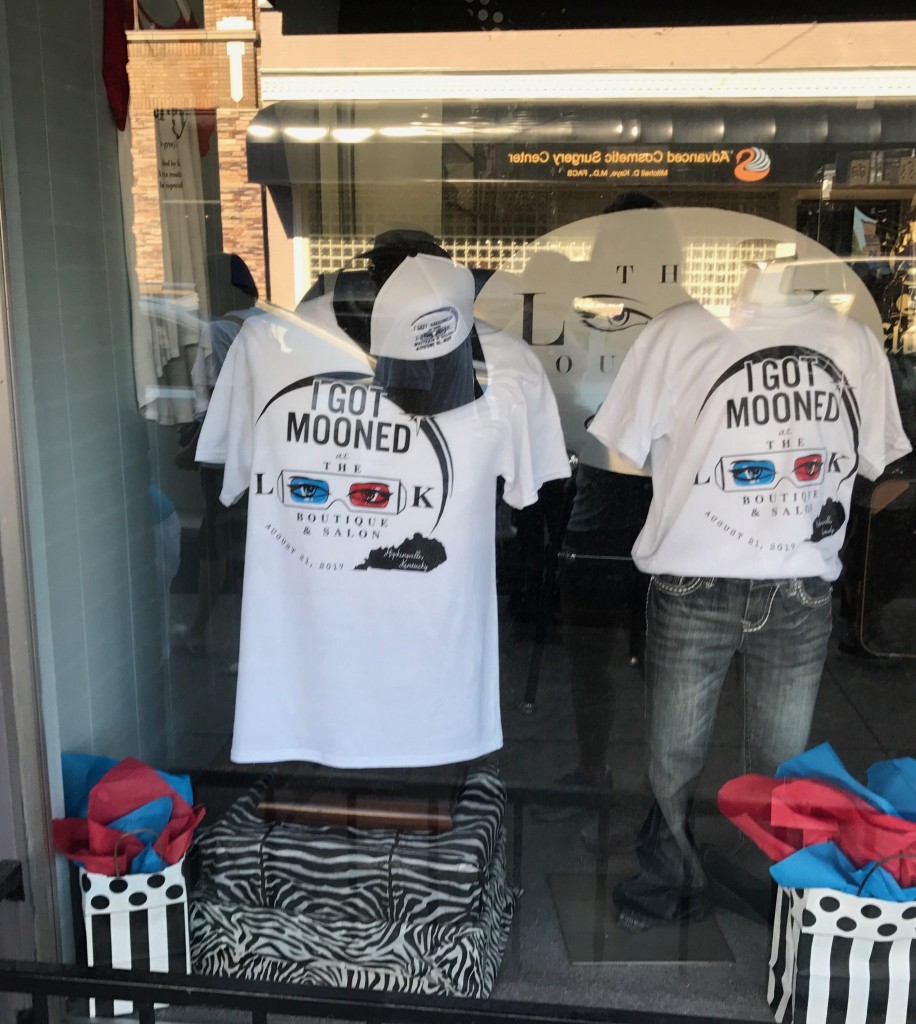 (Remember that whole fixing my hair, applying make up thing I did at 4 a.m.? Well, that was a practice in futility. It was hot, hot, hot in Hopkinsville, and I was a sweaty mess within minutes of touring the town. Vanity be damned, the sun and moon were going to have to accept me as is. And you know, I felt like they really did.)

I thought there would be more people downtown. Turns out that instead of the 100,000 in the area as originally expected, it was probably more like 50,000, and they must have been spread throughout the county. I, however, was perfectly happy with the number that surrounded me, which was enough to be festive without being too much.

As for the 2 minutes and 40 seconds of totality, I cannot quite describe how I felt. Lamely I will say it was more moving than I expected. It was spooky. Other worldly. Amazing. (Gosh, I need a stronger vocabulary to give it its due. Must work on that before the next one!)

This pic of Hers was taking during Totality… 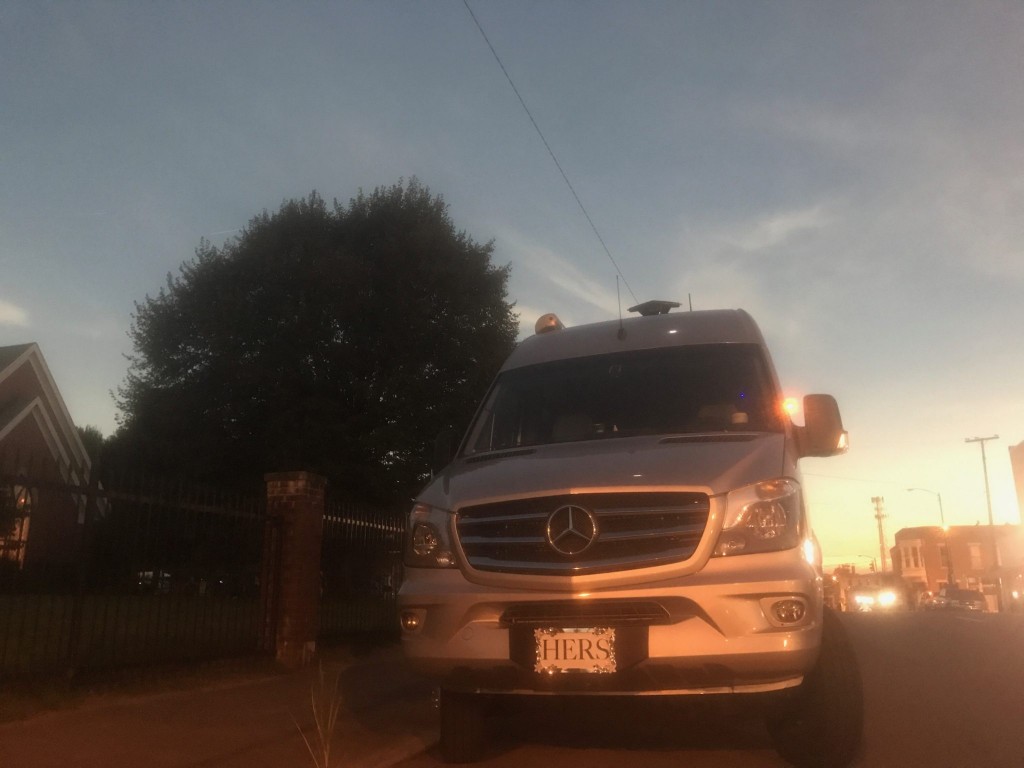 There was no doubt in my mind that it was completely worth the drive to be there for it. No doubt until…

I may have shed a tear or two, though not much … because I was too angry.

I could go on, and on (and on) about the pure misery of my drive home until you vowed to yourself that you would never subject yourself to another blog of mine again. To prevent that from happening — (because I sure am happy you’re here!) — I’ll just state some facts.

Having left Hopkinsville less than ten minutes after totality, it took me 10 hours and 49 minutes ……. essentially, ELEVEN HOURS ……. to drive the first 154 miles. At 1:30 a.m., I couldn’t take it any longer. Feeling shaky and blurry because of that whole, I’m a morning person thing, I knew it was time to give in. It was time to tell the traffic: You win. I sure didn’t want to harm anyone and wasn’t keen on killing myself either, so I pulled into a truck stop and slept till 4:30 this morning. At which time, though feeling horribly hungover, I was well enough to finish the last hour and a half of driving. The roads were clear by then, and that hour and a half felt more like ten minutes.

But I ‘m not ready to say that… not yet. Like childbirth, I need a bit more distance from the trauma to properly assess.

This I can say, I am thankful for wheels. They take me all sorts of places I would never have thought to go. And I am super thankful for the 6 wheels on Hers that take me not only near and far, but also include a toilet so I don’t have to use any of those nasty port-o-potties that the other eclipse watchers waited in long, long lines for.

My son-in-law texted me the countdown to the next US eclipse (2,421 days away), and told me that their house is within its Path of Totality. After sharing the details of the excruciating traffic with him, he said it’s too bad. I could have just waited 7 years and hung out at their house for the total eclipse.