Putting on My Big Girl Pants…or not

I know there are plenty of women out there RV’ing on their own. They do it all. They bring home the bacon and fry it up in a pan. They also empty black tanks, deal with propane, level the coach, and oh yeah, drive the darn rig.

I am not that woman. I have a help mate, Bill. With few exceptions, he drives our coach. And when we arrive and leave RV parks, he takes care of the outdoor chores while I prep the inside.

And while I have always wanted to know what Bill has to do to care for this coach, I don’t want to have to do what Bill has to do. His chores are dirtier and more grueling than mine. He has to sweat. I’m not into that. I told him this before we even bought the first RV. The thing is: I’m not sure that he heard me.

Bill was out of town for a few days when Jerry, one of the employees at the RV park, asked if I could move the coach up about 3 feet the following day while they did some trench work behind it. Sure, I can do that, I said, thinking: Hmmm, how do I put this thing in drive again? I wasn’t too concerned though. I knew I’d figure it out.

When I spoke with Bill over the phone that evening and nonchalantly told him about moving the coach up and back 3 feet, he became concerned. He let me know in no uncertain terms that it was not as easy as turning the key and moving forward a bit. I will spare you a lot of the drama, but suffice it to say, he emailed me 4 pages of instructions, which included all of the strict steps I needed to take before that coach could move an inch.

I got a little overwhelmed. Okay, I started to cry. But not quite yet.

I read his instruction manual about 20 times, starting at 5:30 a.m. on the day of “the BIG move.” It included all of the detailed procedures, with a dramatic flair that only ALL CAPS and italicized words can provide. BE CAREFUL and DO NOT and NO were some stand out words, along with the warning of my getting electrocuted if I did such and such incorrectly. So as I’m sure you can understand, I was getting a little concerned myself at this point.

By way of background, I have a fear of heights. I deal with them, but I don’t like them. I hate flying, skyscrapers, 2nd floor balconies with glass walls, edges overlooking a drop, etc.. Just. don’t. like. them. But again, I deal. (Heck, I even jumped out of a plane once. But that’s a different story.)

The morning dew was still fresh. In fact, my right foot slipped during my first attempt up the ladder. Then as I neared the top of the coach, it really hit me: What the heck am I doing???

Well, what I was doing was putting on my big girl pants and sweeping off the slide toppers — while crying. I had assured Bill the night before that I would do each step to the best of my ability. And sweep I did, crouched down as low as I could, slowly pacing up to the front of the coach and then back and side to side. Broom in hand. Crying all the way.

So, yes, I did it. But crying kind of detracts from my awesomeness I’m afraid.

Once back down on blessed ground, the tears were still hanging out on my face. My eyes were red. And then comes Jerry over to speak with me again.

He could tell I was in a state. I explained that I just swept the top of the coach in prep for the 3-foot move and that my irrational fear of heights got the better of me. (Although how irrational was it in this case? I was on top of a wet, convex roof, with nothing to break my fall, but the ground … of course.)

I could tell Jerry wanted to get as far away from me – a crying adult woman – as possible. I was relieved when he quickly walked away. I just wanted to regroup because there were still 2056 more steps in Bill’s instructions to go. (Well, not 2056…I’m exaggerating…a little.)

Within minutes, Jerry was back. He said he had no idea I would need to do all this. They would work around the back of my coach. No need to do anything more. No need to move the coach at all.

If I needed to get on top of the RV right this minute, I would, and I wouldn’t be crying either. It’s just that on that morning, my nerves were already frayed from all the instructions (and all the capital letters, italicized words, and warnings of my imminent death if I erred) that the whole fear-of-heights thing just pushed me over the emotional edge. (Thankfully, though, not off the RV’s rooftop edge.)

I think the lesson I’ve learned is this: I can do what needs to be done. I might not want to. (In fact, I don’t want to.) And I may end up weeping like a willow. But dagnabit, this isn’t rocket surgery! Get ‘er done. 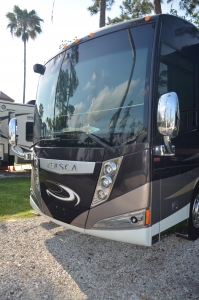 See how TALL this thing is!