Radiator Trauma and Drama – on Motorcoach

Our motorhome (2013 Itasca Ellipse) developed a radiator leak on one of its bottom corners. I decided to remove the radiator myself (early 2022). So here’s a few pictures of the removal process. 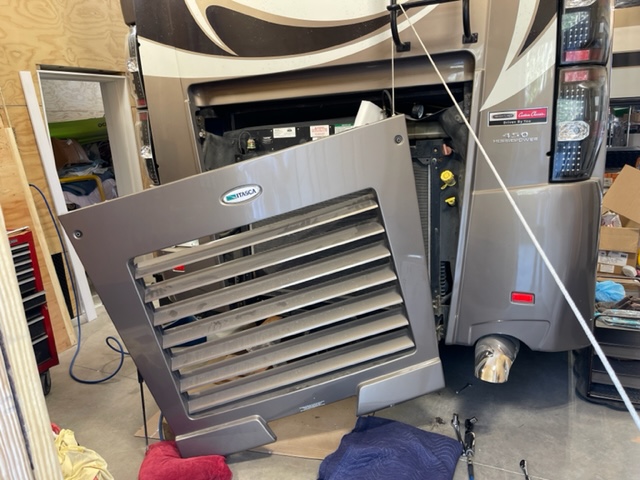 Had to first remove the rather large and awkward rear radiator cover. Did this alone so had to tie one side off as I removed the last bolts. 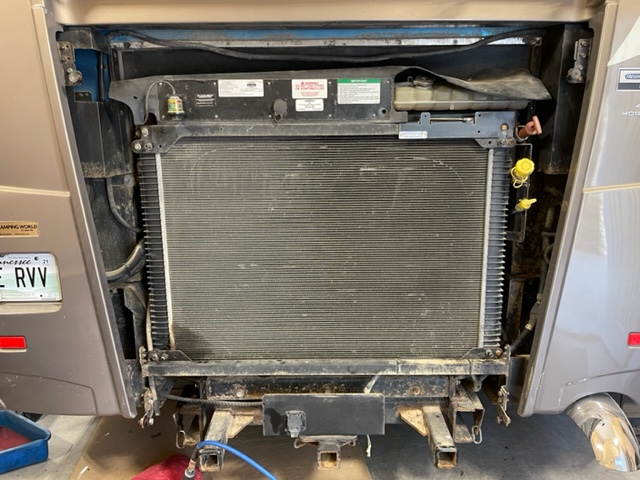 Radiator view without the cover. Note the leak (dark area) in the bottom-left corner. 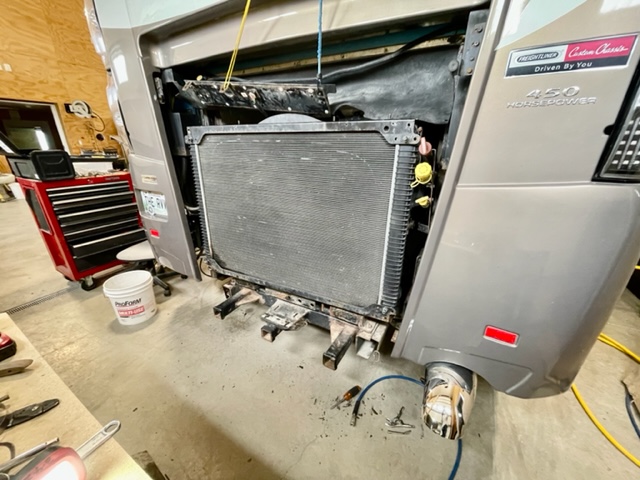 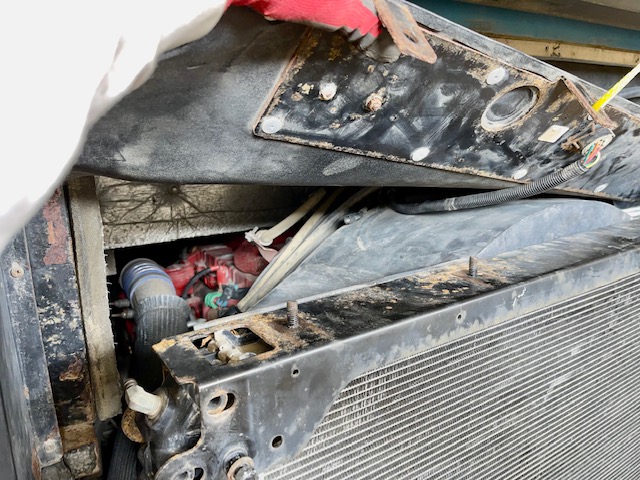 Shows the large plate-like piece that was bolted to the radiator top – now removed & suspended above the radiator to better facilitate access for further dismantling. 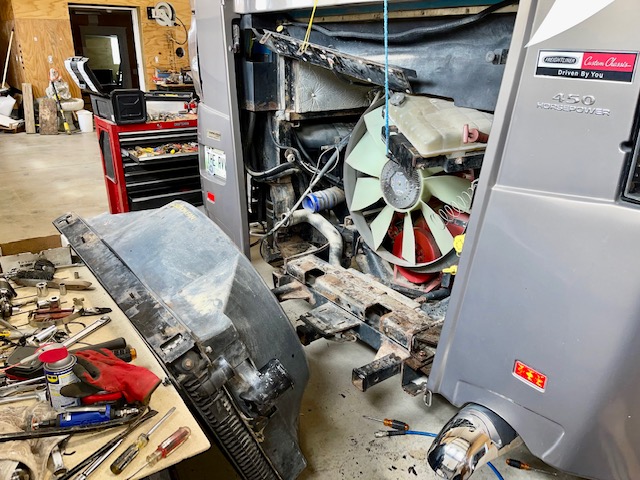 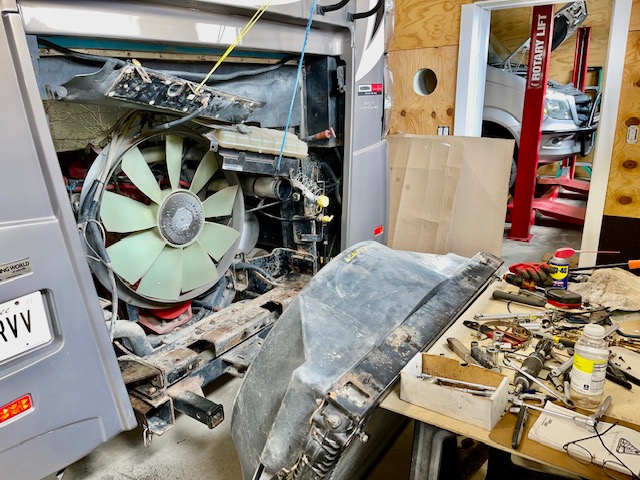 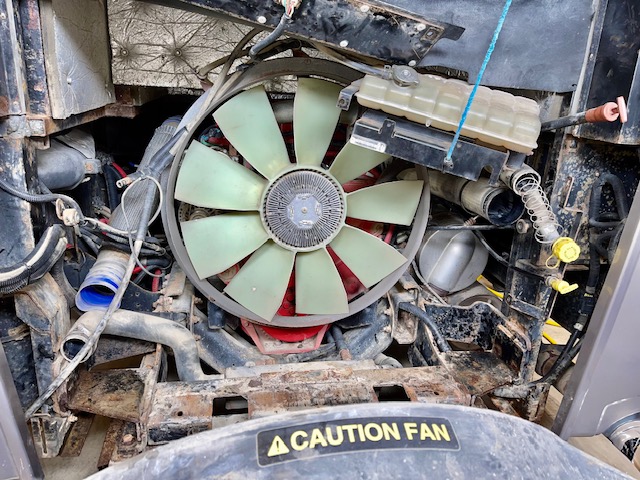 Here’s the gaping space left after the radiator removal, revealing the large plate (mounted atop the Class 5 hitch) where the radiator sat. 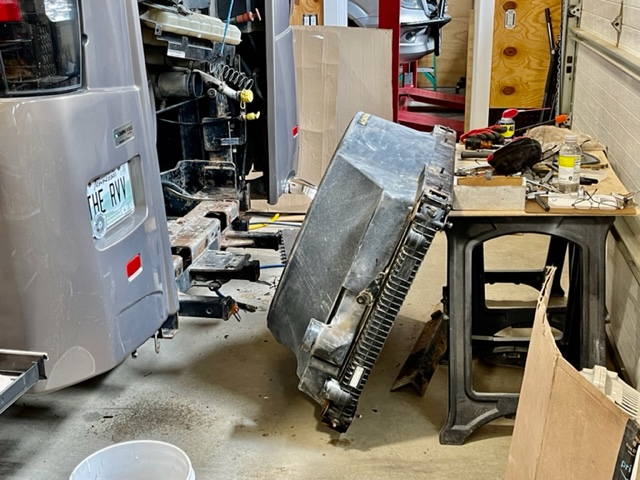 This is one thick and heavy fan shroud! 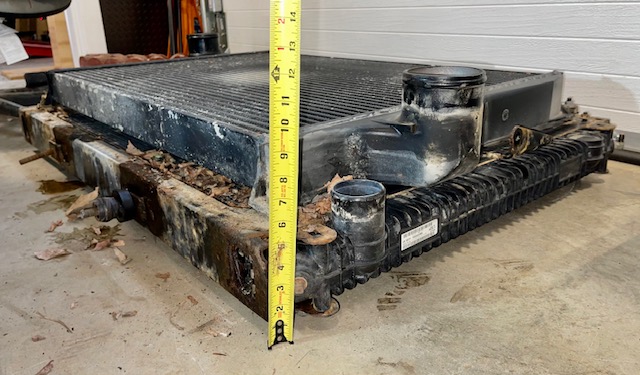 Note the thickness, at approximately 9-1/2″ of the radiator AND  CAC (Charge Air Cooler/turbo intercooler/turbo air cooler). Also, and more importantly, note the debris that has collected at the bottom of the radiator. And realize, with the fan shroud in place, any debris that entered the shroud apparently settled into this corner, where the radiator corroded into a leak. After further research, I’ve learned this area should be cleaned out AT LEAST ONCE A YEAR! 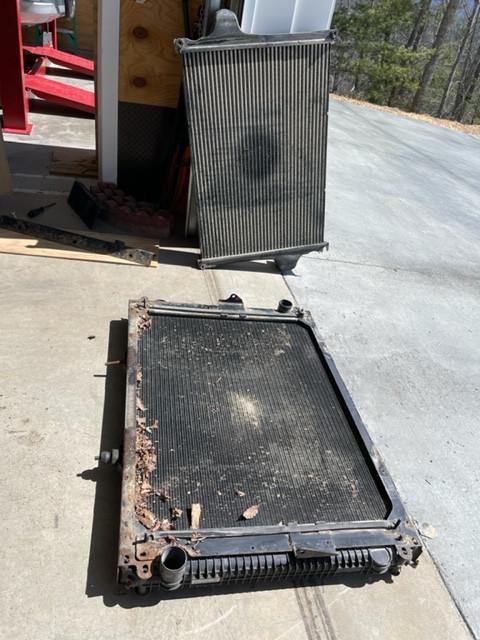 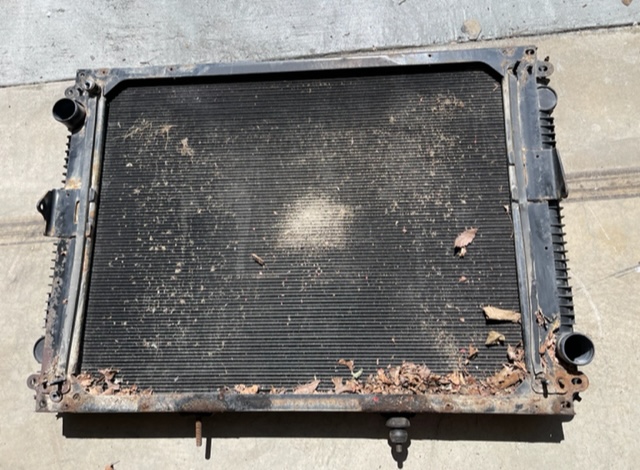 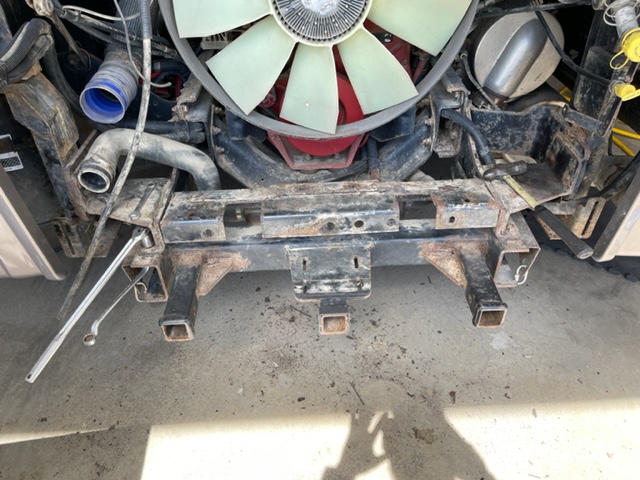 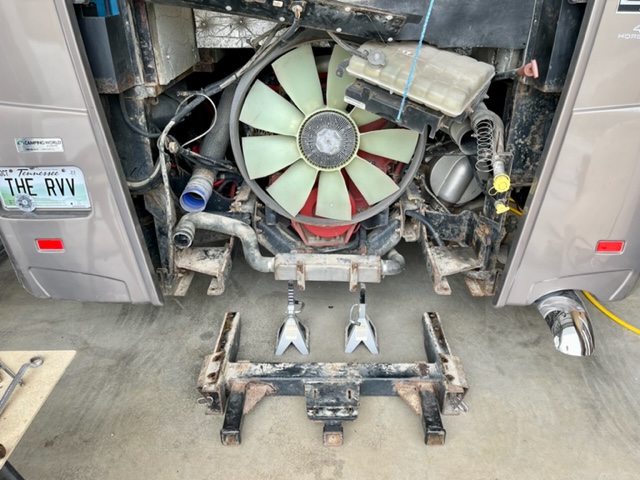 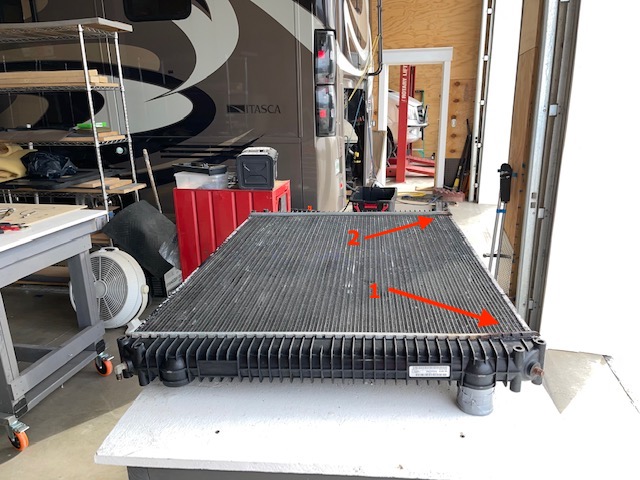 Damaged area of the radiator is the right corner in the foreground (1).
While this corner was the one leaking, note that the other bottom corner (2) also had the darkened corrosion area like the leaky corner had. I figured it was soon to begin leaking as well. Both corners had quite a bit of debris that had collected there, once inside the shroud. 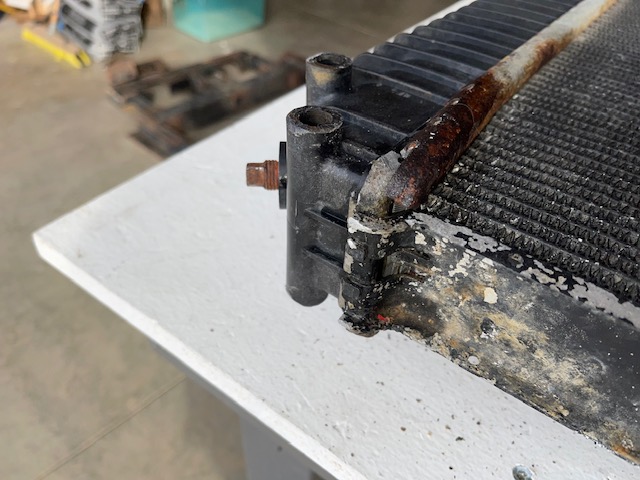 Close-up of location of damaged area of radiator. 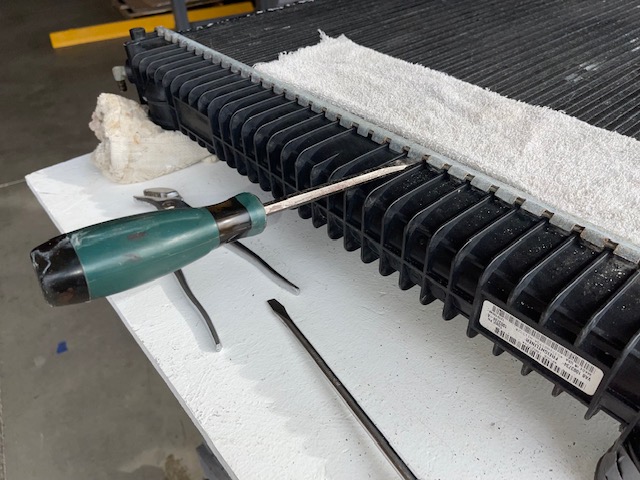 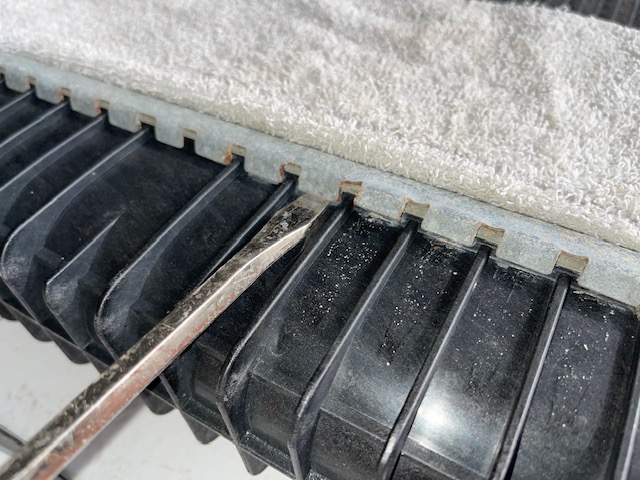 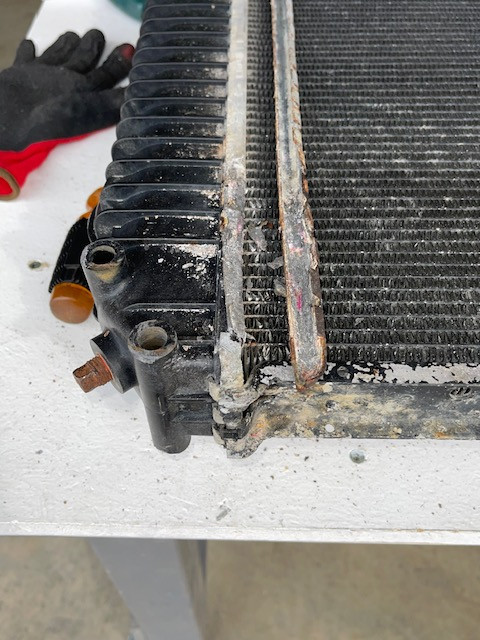 These photos illustrate the removal of the side tank – simply prying up each tap that grips the plastic tank, holding it into a slot of sorts, with a rubber seal. 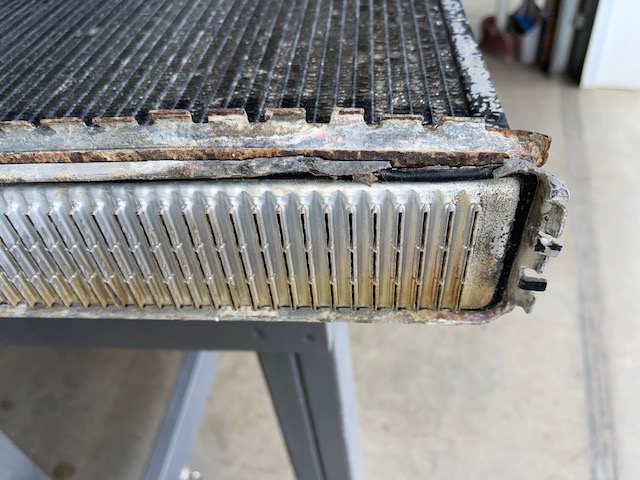 Once the side tank was removed, it revealed the culprit of the leak – the aluminum seat for the plastic tank had corroded away, further revealing the black rubber seal, and permitting a leak.
Susan 2022-06-09T10:39:16-04:00