Traveling with Pets – Henry, Emily, ZuZu, and Which One Pee’d on the Bed 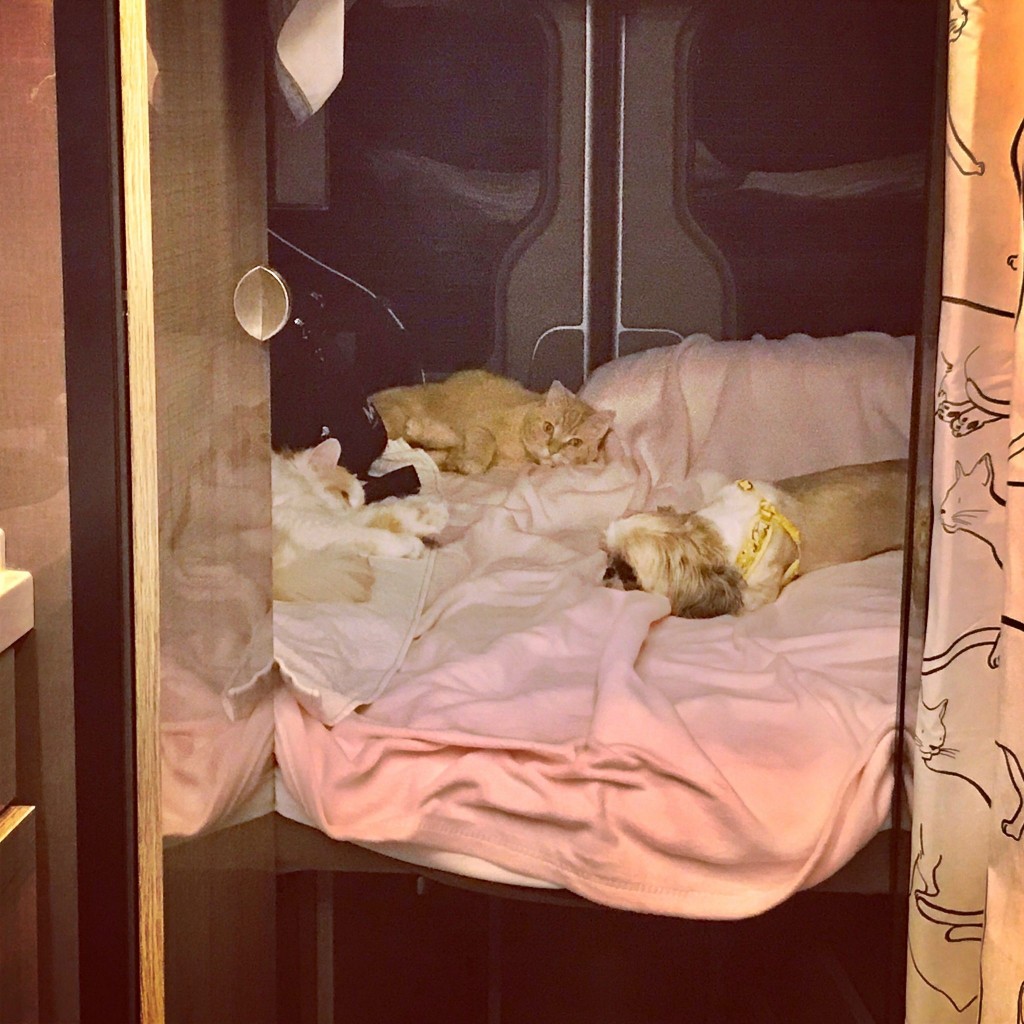 See these three angels? Left to right, they are Emily, the most dainty cat you will ever meet; Henry, our firstborn; and baby puppy girl, ZuZu, our dog who probably thinks she is a cat.

I took this pic tonight during one of their 200 naps of the day.

We are RV venturing in the panhandle of Florida, and it’s blue sky gorgeous here!

We’re in our 24′ camper van, affectionately known as Hers. (Read this if you’re curious about the name!)

I really prepared for this trip. You know the kind of road trip where you throw everything in willy-nilly and hope for the best? Well, I was determined this trip wasn’t going to be like that. I took my time planning, gathering, and carefully loading the van, so it was comprehensive and neat as a pin, and as I drove down the interstate, I felt pretty pleased with myself.

To add to the perfection, I was staying at the Shangri-La of Panama City Beach — Emerald Coast RV Beach Resort. I took this picture below in the early evening of the first night. Doesn’t it look cozy?? Almost idyllic, really. That was before it happened. 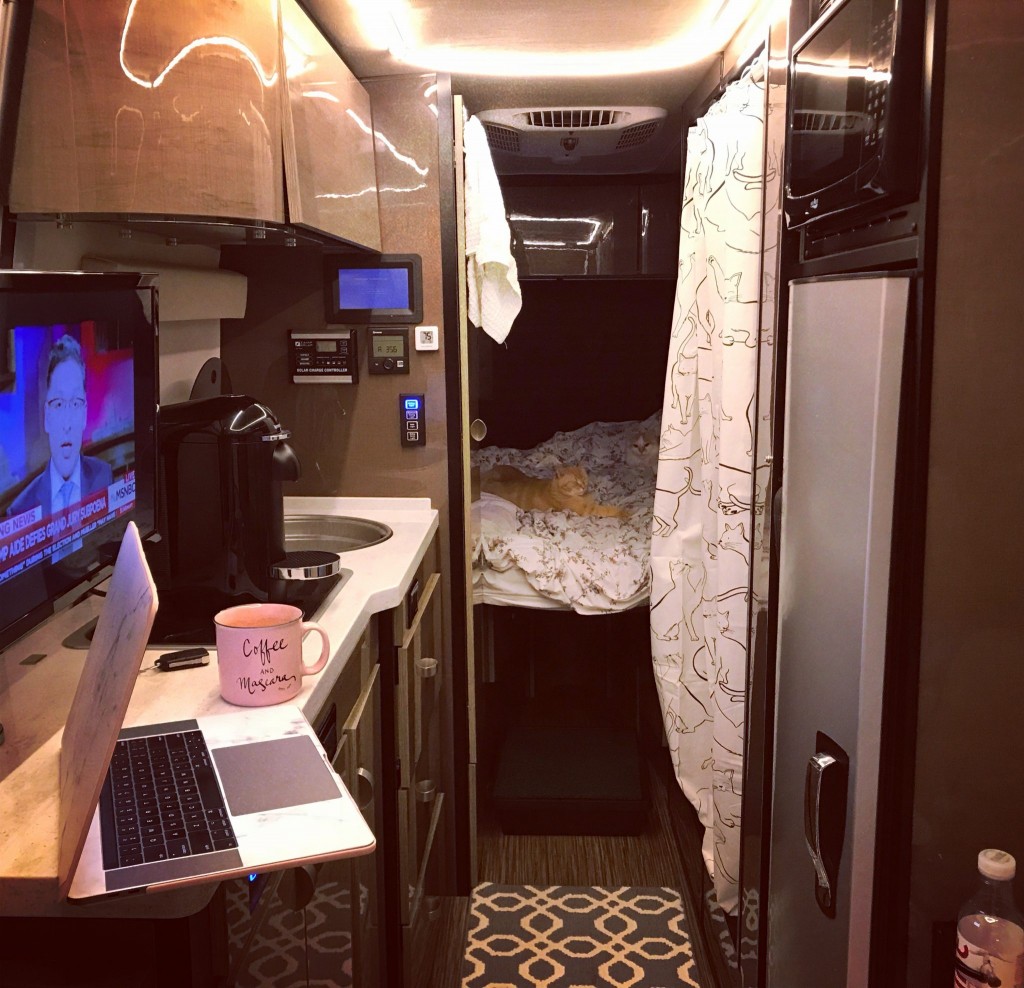 (Note Henry and Emily sleeping (yet again) on the bed in the back. Aren’t they cute??)

So, anyway, I was pretty darn happy with life and placed my sleepy head on the pillow that night without a care in the world.

Then, (other than death or serious illness), THE worst thing that could have happened happened. I woke up at 2 a.m. to some sort of stinky wet spot near the foot of the bed. What? What?? WHAT???

One of my four-footed angels pee’d in the bed.

Emily and ZuZu were asleep in the bed with me.

I threw them off the bed (not literally), grabbed the vinegar, poured it over the wet bedding and mattress, and stripped the bed bare.

I did not fall back to sleep.

At the time, I assumed ZuZu did it. She’s a little doggie with a little bladder, and when she needs to pee in the middle of the night, she wakes me up, and I place her on the floor (she doesn’t know she can jump) so she can go to her indoor potty.

I figured she tried to wake me up, and I must have been so out of it (after having driven just shy of 12 hours that day) that I didn’t wake up.

So I pretty much blamed myself for the pee in the bed.

(That sounds weird, doesn’t it?)

I definitely did not think one of the cats did it. They’ve not pee’d outside of their litter box EVER.

As soon as the campground office opened at 9 (why so late?? I’d been up for 7 hours by then!), I told them my sad sob story and traded my cash for quarters. Within two hours, I had clean bedding back in place, and I found it fairly easy to go on with my life.

That night, I did not let ZuZu sleep in my bed.

Clearly, one of the cats was acting out.

Both of our cats are neurotic and basically scared of everything, but one of them – Emily – HATES RV’ing.

So it must have been… Emily!

On the other hand, Henry, who is sweet and super loving 90% of the time, turns psychotic without notice and has been known to attack me. (I know that sounds bad, but don’t worry.)

So it must have been… Henry!

Regardless of which did it, I had bigger fish to fry at that moment. This wasn’t just pee. This was CAT pee!

Cat pee is its own beast. Vinegar ain’t going to cut it – literally.

So I did the only thing I could do when faced with such a thing; I threw money at the problem.

After visits to Petsmart and Bed Bath & Beyond (plus a quick stop at Ulta for a new lipstick, because I needed something to make me feel normal after such foulness), I felt prepared to go to battle. 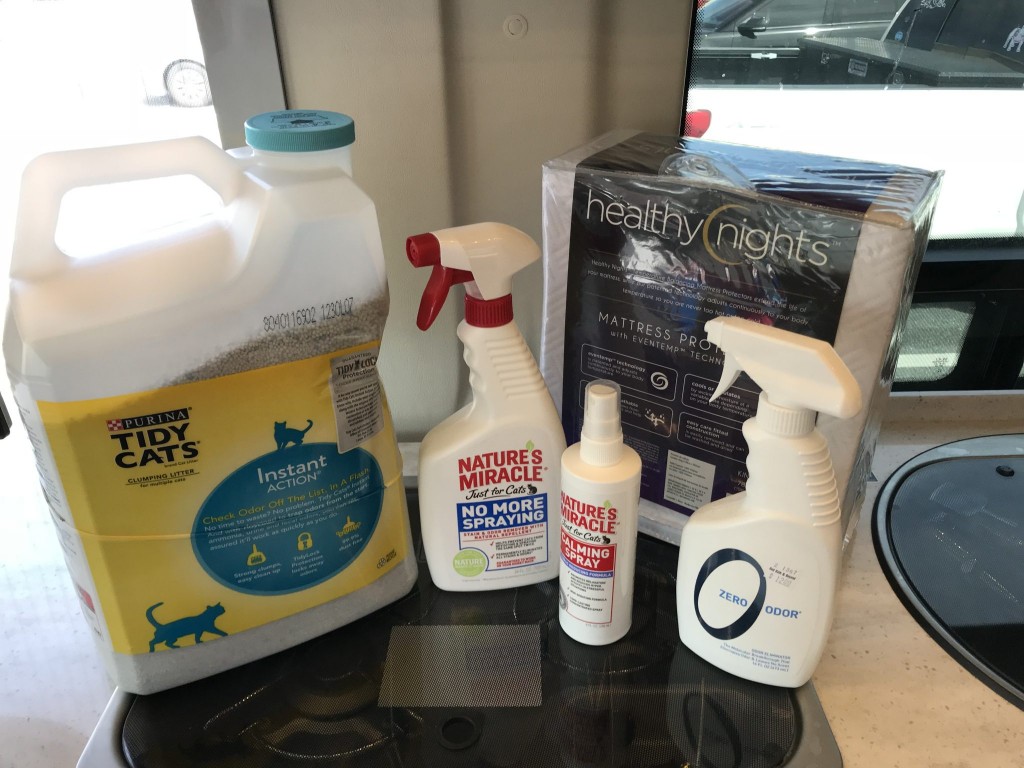 A new jug of their “old” litter

Regarding the litter…I may have made a teeny, tiny error in judgment during my awesome RV trip prep. I bought a new kind of litter.

Well, I didn’t actually buy a new kind of litter but rather a new scent of the same litter I had switched the cats to about month ago. I love(d) this litter, which is aptly named: World’s Best Cat Litter. It’s not nearly as dusty and clumps so much better than the Tidy Cats pictured above. But before this trip, I got it in the lavender scent. Is it possible? Could it be? … Is one of my cats so averse to lavender that he or she is willing to pee on my bed??

Who knows? But to be safe, I went back to their old old litter.

Oh! One more thing! I have a Canary security camera in the van. So I set it up in the bedroom last night, pointing at my feet, just in case the cat culprit had the audacity to strike again.

My bases were covered. Hopefully, there would be no more tomfoolery, but if there was, I had the necessary items to combat it and the video to prove it!

And, (insert drum roll), what will happen tonight???

Your guess is as good as mine!

If you’ve stuck with this post for this long, thanks for hanging in there as I’ve told my tale of tabby turmoil. Sorry it was kind of gross. 🙂 But can you relate? Any similar stories you could share? If so, please share in the comments! I’m so thrown by all this that I would love to have a support community who share in the pain of such pet mayhem and muck.