While Bill was going to be out of town for work, I was eager to hit the road again in Hers for another solo van-trippy trip, along with my trusted puppy side-kick, ZuZu. I asked Bill for suggestions as to where to go. He didn’t hesitate for a moment: Michigan.

I didn’t want to go to Michigan. Next idea please.

Well, that was all he had.

Given our current location in the motor coach and where we are going to be in the near future, heading north did make the most sense.

But I had another northern idea. Minneapolis! I would do my very own Mary Tyler Moore show tour. Oh, wait. Even better: Make it a 1970s TV Road Trip, including Minneapolis, Milwaukee (Happy Days, Laverne & Shirley), and Chicago (The Bob Newhart Show).

Bill shrugged at my idea. He didn’t say anything, but his shrug clearly meant: Well, if that’s what you want to do; if you really think that is better than Michigan.

So I took the logical next step. I googled this Michigan thing.

Oh wow! Really?? You got stuff like that up there? Who knew? (Did you guys know about Michigan?)

The more I read, the more excited I got, and so, Michigan it is. Or should I say, was, since I am back now. Here’s where ZuZu, Hers, and I went…

Such a cute Bavarian town!

When I threw out a query on FaceBook asking for Things to Do in Michigan, a friend mentioned Frankenmuth.

It was well worth the stop. I spent a couple of days drinking coffee while strolling up and down Main Street, with all its cute shops and restaurants to choose from.

This town’s pride is evidenced in the care they take in maintaining and beautifying Main Street.

I stayed at Frankenmuth Jellystone Park, which is within walking/biking distance and really enjoyed my two days there! (Click here to read the RV park review.)

Word on the street is you cannot visit Michigan without heading up to Mackinaw City and taking the ferry over to Mackinac Island. While not against doing this, I had no real excitement over it. That is until Bill told me that this is where Somewhere in Time was filmed. Uh, what? Shut the front door, and sign me up!

I biked the 8-mile perimeter of the island, dodging horse poo-poo, and gazing across the vastness of Lake Huron. Once away from the tourist trap dock area, it was such a pleasant, peaceful, mostly flat bike ride.

And, of course, I had to stop by the Grand Hotel, as it, along with Christopher Reeve and Jane Seymour, plays a major role in the 1980 movie.

When I was a teen, this movie was the most romantic thing ever. But I hadn’t seen Somewhere in Time in over 20 years. I honestly couldn’t remember it very well. So, while putzing around Mackinaw City the night before ferrying to the Island, I bought the DVD from a local shop. I was then eager – beyond comprehension – to get back and watch it. Which I did. And…well…it no longer played to my 44-year-old self as the most romantic thing ever. But I can suspend reality, for the sake of sentimentality, when need be. And I shall do so with this, just as I do with other things that I loved as a child, but that don’t really translate into my present-day aesthetic.

What can I say but: Long live Somewhere in Time, and here’s to hoping that teens today would watch it and think it’s the most romantic thing ever. (They won’t, right? But… here’s to hoping.)

Next stop — Pictured Rocks. From my pre-trip research, I was looking forward to this stop the most! The pictures online of the rocks and their formations are stunning, and I could not wait to see them in person.

But, alas, it was not meant to be.

Don’t get me wrong. – I stopped there alright. But unfortunately, it stopped me.

The best way to see Pictured Rocks is by boat. But this landlubber apparently travels best by wheels, not rudder, because I got sick, sick, sick – all within the first 20 minutes of the nearly 3-hour cruise.

I ended up spending the first hour and a half seated, scared to move even an inch in fear of tossing my cookies. Then, a concerned sailor ushered me to the open area in the back of the boat, and there I stood for the last hour and a half, breathing in both the welcome fresh air and the unwelcome diesel fumes.

I was so disappointed – in myself – and I could not believe it was going down this way.

The final stop in the wolverine state was Sleeping Bear Dunes. By this time in the trip, my energy level was sadly at a low point, so ZuZu and I drove along Pierce Stocking Scenic Drive, stepping out of Hers at several of the lookout points but not actually hiking or biking any of it. This I regret. But it only means I will have to return. I would love to come back here with Bill and hike the different trails and really experience the dunes!

The campground I stayed at that day was in Traverse City, which is a 45-minute drive away from the dunes – Holiday Park Campground. Feeling fairly unsettled having been on the road alone for a week, I took some time to get things in order, which almost always makes me feel better. I swept and mopped the van, Clorox wiped all surfaces, gave ZuZu a bath, wrote and read. By the time the evening came, my energy level was back to normal – maybe even a bit higher than normal. I felt ready for another week on the road. – Another week in Michigan.

But all good things must come to an end. It was time to head home, home to our two cats Henry and Emily, and my handsome RV Venturer husband. And like MacArthur, I shall return, and I am already looking forward to it! 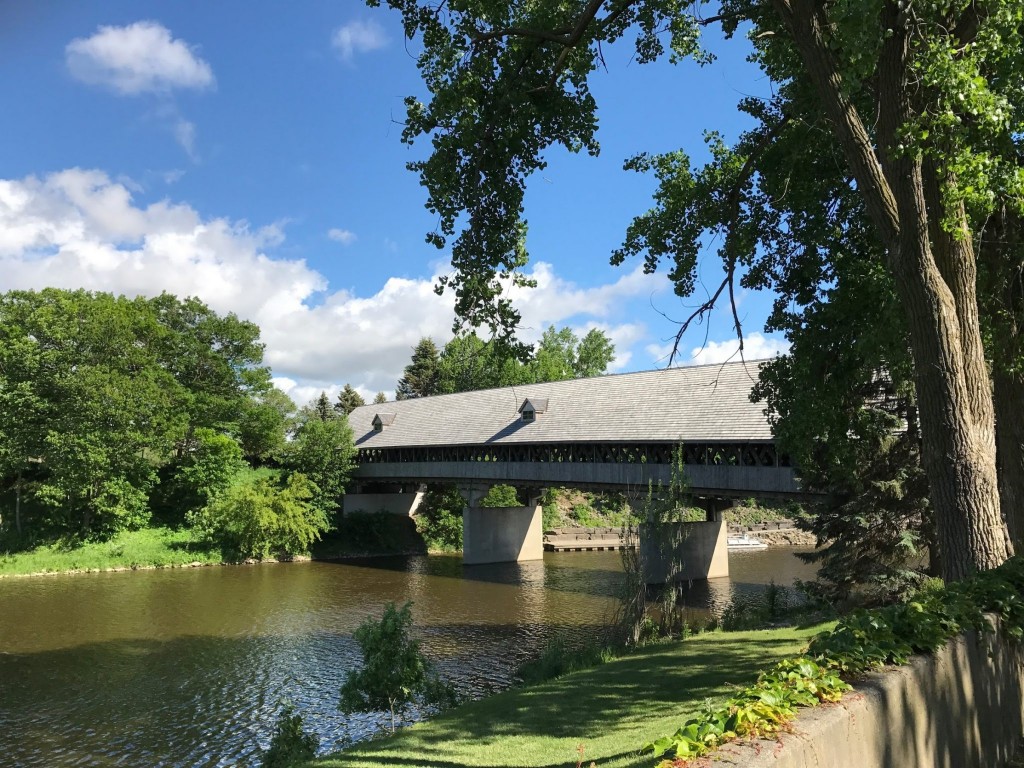 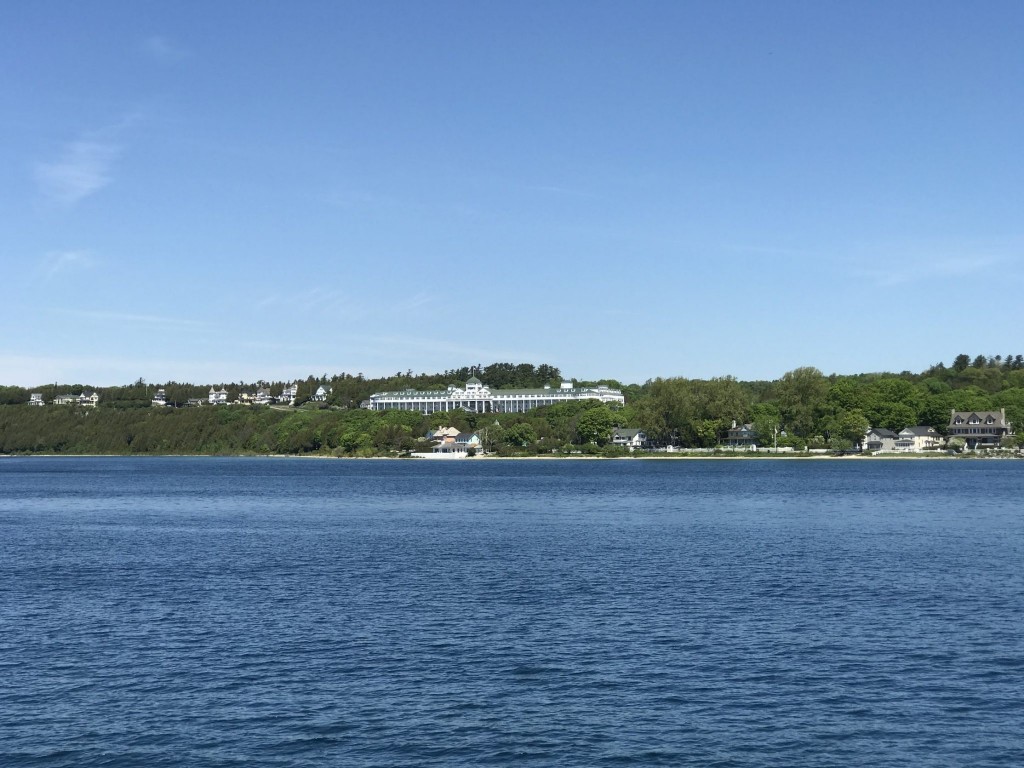 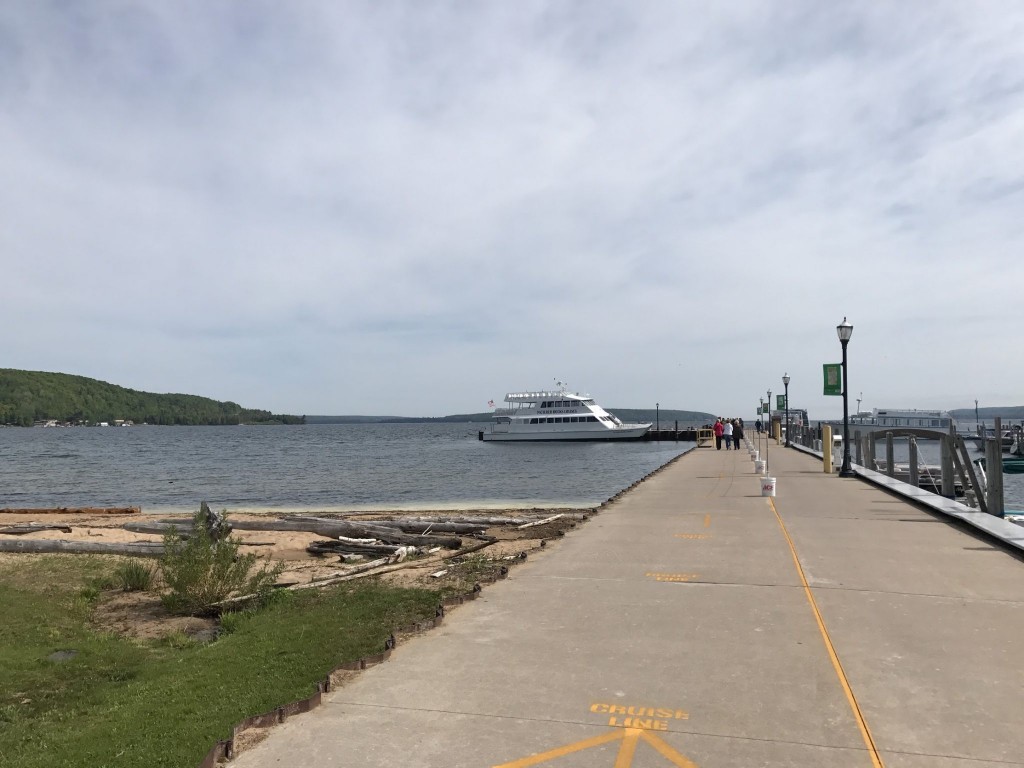 The ONLY picture I took at Pictured Rocks, sadly. 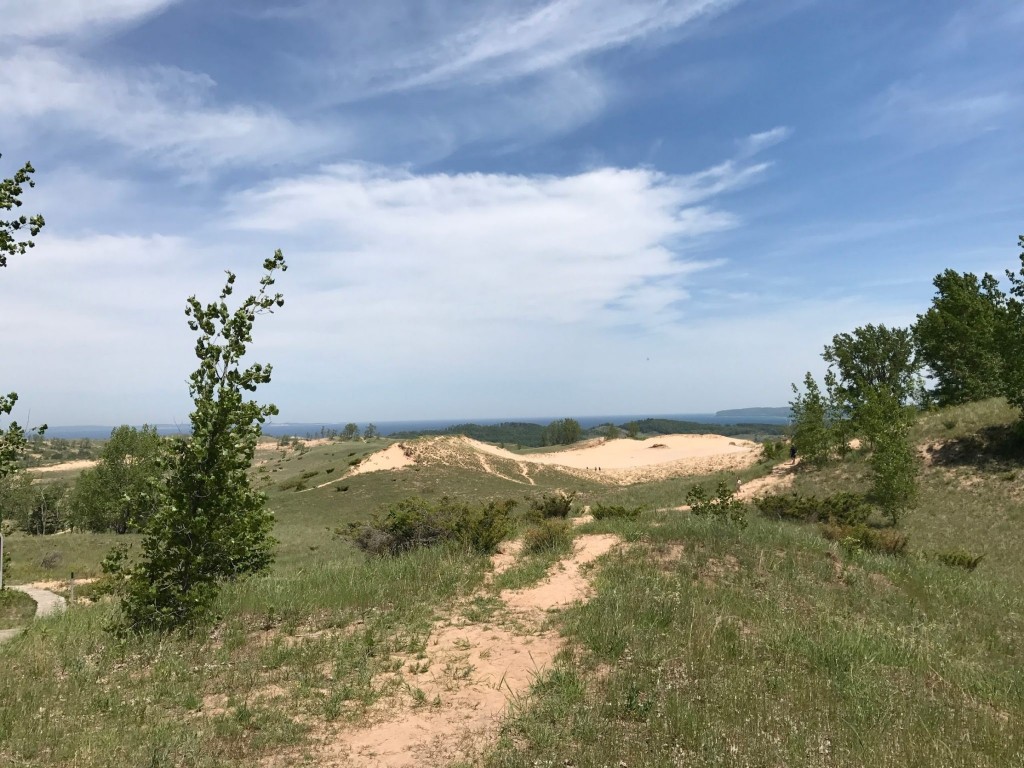