Where did summer go???

“My favorite poem is the one that

starts ‘Thirty days hath September’ because it actually tells you something.” 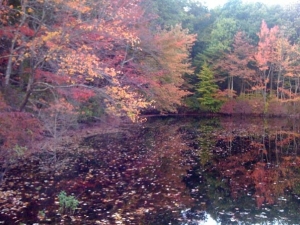 I’m not quite sure how it happened, but it’s September. That’s weird… right?

The RV parks are settling down. Less splashes at the pool, less squeals from the swings. Fewer puppies and fewer pop-ups.

We too are set for change. This ol’ tag of ours is going to weigh anchor in a few weeks and head north to New England.

By the time we near Boston, the leaves will surely have fallen, and the chill in the air will probably be downright cold, but I do not care. Because… as I mentioned… I AM SO EXCITED!

Ten lifetimes ago, I lived in Concord, Massachusetts, for a year. It was my dream town. And while there, I soaked in all of New England, and I loved it. Its history. Its beauty. Its charm!

Do you remember the television show “Newhart”? – Where Bob Newhart is an author, turned inn keeper in Vermont. It was on air from 1982 to 1990, during my “formative” years. I was nearly ten, just a kid living in Kentucky, when it premiered, and from that time until I actually did it, I dreamed of living in New England. That’s a “dream span” of roughly 25 years. And I finally made that dream come true! At least for a little while.

But life gets complicated and decisions have to be made, so after my one year “sabbatical,” for various reasons, it was time to move on. And move on I did. But now that my “moving on” involves an RV, the world’s my oyster. Or, at least North America is. So me and my fella and our furry fam of three will enjoy some time in New England this fall, and no doubt, love every minute of it.

Perhaps we’ll see some of you RV venturers heading south as we head north. As always, safe travels to all of you! Leave us a comment below and let us know where you’re planning to spend your fall of 2015.